Diabetes mellitus of pregnant women is disorder of a carbohydrate metabolism originated or diagnosed for the first time in the period of pregnancy. The degree of disturbance of exchange processes can be diverse: from "pre-diabetes" – disorders of glucose tolerance, till an emergence of an unwrapped clinical picture of the disease with its intrinsic complications. The Gestational Diabetes Mellitus is, indisputably, one of the central problems of obstetric practice.

Dangers of The Gestational Diabetes While Pregnancy

In case of presence of gestational diabetes, complications of the pregnancy are by no means rare phenomenon. The development of this disease at early terms of pregnancy is prone to sharp increase of risk of spontaneous abortion (i.e. miscarriage). Even if pregnancy is maintained, one can not exclude likelihood of a baby's having various congenital malformations, in addition, the tot`s vital organs (heart and brain) will become the first place "target" of the disease. If the disease attacks an organism of a pregnant woman on the 2nd or 3rd trimester, this can become the cause of a macrosomia (excessive mass of a fetus) and to a diabetic fetopathy after the birth.

Diabetic fetopathy is a frightful disease of the neonatal period, typical manifestations of which are the following: large mass of a newborn, disproportion of the body, big shoulders and relatively short and thin limbs, magnified abdomen in consequence of excessive increase of subcutaneous fat, swelling of the soft tissues and skin, the swelling of the face, the yellowness of skin, the presence of “punctate” hemorrhages, the disorders of respiration, glucose is lowered and viscosity is increased in blood. Some changes of the neurological status are possible: insufficient muscle tone, physiological reflexes are oppressed (sucking one), alternation of periods of inactivity and hyperexcitability.

Difference of Other Types of Diabetes Mellitus

Diabetes mellitus is the frightful endocrine-metabolic disease, the cause of which is a shortage and/or inefficiency of insulin hormone (it is synthesized by the pancreas) characterized by pathology of the metabolism (in the first place, of the carbohydrate one). Almost always hyperglycemia (sugar fasting blood level increased above physiological normal condition) and glucosuria (presence of the glucose in urine) are laboratory criteria of this diagnosis establishing.

The diabetes mellitus is classified as follows.

The decreased non-resistance of an organism, i.e. its cells and tissues, to its own hormone insulin (insulin resistance) underlies this disease. Its development is linked mainly to the rise in blood of the level of hormones, typical to the pregnancy period. In addition, the glucose requirement of the fetus is sufficiently high, which leads to increased consumption of the glucose by the placenta and sharp reduction of the level of glucose in blood of the pregnant woman. The organism tries to "compensate" the low content of glucose and stimulates the pancreas to intensely secrete insulin. Gradually, the reserves of the pancreas become exhausted, it loses ability to produce insulin in the needed amount, thus, conditions for pregnancy diabetes are created.

It is the fact, that after the labor the indicators of glucose return to the normal values sometimes. However, even then, one can not completely exclude a possibility of development of the disease. One needs to necessarily give attention to the diabetes prophylaxis. 10-14 weeks after the child birth, the repeat testing for diabetes is recommended. If survey does not reveal deviations – continue to be checked at least once in 3 years. It is desirable to also undergo survey for the level of glycated hemoglobin.

Risk Groups in Development of Diabetes Mellitus While Pregnancy 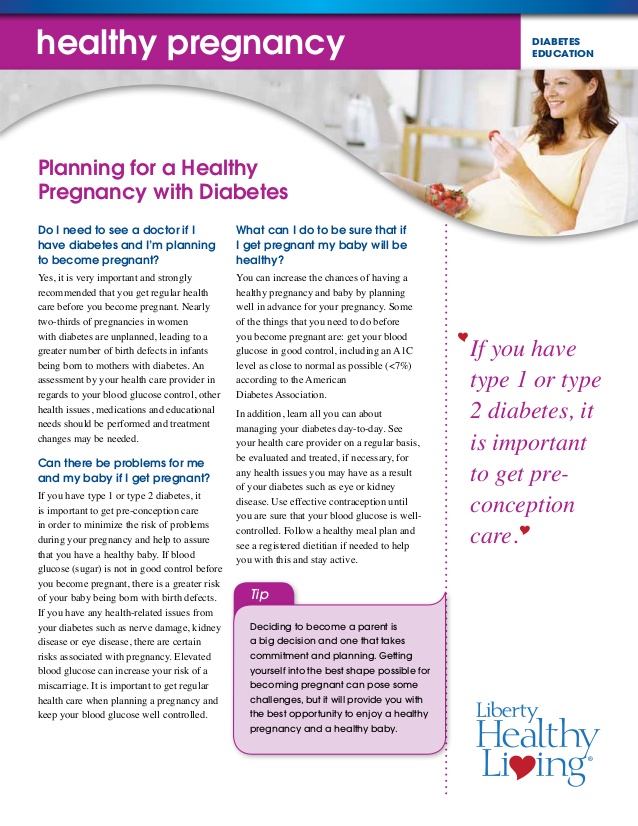 The significant role in development of this disease belongs to hereditary predisposition.

The launch factors for its implementation can be the following:

This disease does not have any specific manifestations. One can often make a diagnosis only by means of pregnant woman screening. The women belonging to risk groups should certainly check indicators of fasting blood sugar. If this indicator exceeds the norm, the woman must undergo "the load test with glucose". For the purpose of the revelation of the GDM (Gestational Diabetes Mellitus), on the term of 6-7 months, all the pregnant women are exposed to conducting of a glucose tolerance test reflecting the quality of assimilation of glucose by an organism.

If the test results exceed normal condition, the physician has strong reasons to make the GDM diagnosis. Repeated conducting of the test is possible (in a case need). If the diagnosis is made in time and the woman is under observation of specialists (endocrinologist and gynecologist obstetrician), strictly observing all their recommendations, the risk of a sick baby birth reduces enormously.

Treatment of Diabetes Mellitus While Pregnancy

The woman needs to constantly control rates of blood glucose (+ at a minimum, 4 times a day). Dietary intervention is necessary for adjustment of the disease. The day amount of calories is to be limited up to 25-30 per 1 kg of weight. The fetal development directly depends on meals. The intake of antihyperglycemic drug is strictly contraindicated in the period of pregnancy. If the diet and the moderate physical activity do not produce the due effect, one needs to opt for the insulin therapeutics.

The correct meals are an integral component of successful treatment. One needs to focus attention on reduction of calorific food value, in no way affecting its nutritional value.

The following simple recommendations are developed by the physicians: