Colposcopy is a procedure in which a doctor using a special instrument, a device resembling a microscope, inspects the vagina and/or cervix. Colposcopy during pregnancy may scare the woman-and not only because it means that the physician has reason to suspect that she has serious dysfunctions, but also because of fears that this procedure can be dangerous for the baby.

In fact, the colposcopy during pregnancy is associated with minimal risk for both the woman and fetus-of course, provided that an experienced physician carries it out using modern equipment and complying with all safety rules, which allow to virtually eliminate the possibility of infection. Of course, pregnant women have the opportunity to dispense with colposcopy, but it may be associated with greater health risk.

What Colposcopy During Pregnancy Can Be Prescribed For

In the vast majority of cases, colposcopy is performed after abnormal smears were obtained from the surface of the cervix. Ideally, this test should be undergone before pregnancy, but it is not always possible.

In rare cases, the presence of abnormal cells in the biopsy of the cervix may be a sign of cancer. The probability of it is low, and, however, to exclude it or detect malignant tumor-colposcopy is needed. If you are prescribed this procedure, don't worry too much-cancer is identified in less than one out of thousands of women who have had abnormal cells.

It should be noted that the colposcopy is only a diagnostic procedure, rather than a method of treatment of any disease of the cervix. If any anomaly is identified, the physician will choose the treatment options that are associated with minimal risk to the fetus, and for sure will discuss them with the patient. It is not worth fearing that without your knowledge any invasive manipulation that may harm the baby will be made.

Colposcopy of the cervix during pregnancy can also be prescribed in the following cases:

How Is Colposcopy Performed During Pregnancy 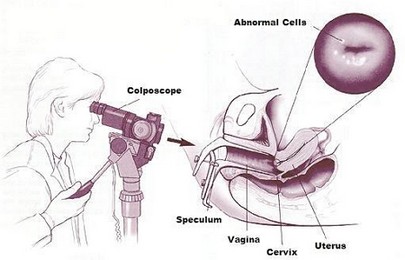 In general, pregnant women have a colposcopy carried out as well as with everyone else. However, since the normal cervix during pregnancy doesn't look as at other times - it is covered by quite a thick layer of mucus, due to which it can be difficult to see some neoplasms, there may be signs of redness, and so forth-it is desirable that the patient is sent to the doctor who already has had experience of colposcopy in pregnant women. At the beginning of the pregnancy it may be difficult to examine the status of certain cervical structures, and if the first procedure does not give enough information for diagnostics, colposcopy may be repeated after six to twelve weeks, or after the twentieth week of pregnancy.

Due to enhanced vascularization of the cervix during pregnancy and related increased likelihood of heavy bleeding, biopsy is done only in cases where there are reasonable grounds for suspicion of a high degree of dysplasia or cancer.

Colposcopy is a painless procedure, but for some women it may cause some discomfort. If you wish you can take paracetamol in half an hour or an hour before colposcopy - it is safe for pregnant women, and eases the discomfort that may occur during the procedure.

At least 24 hours before colposcopy you should:

Since for many women colposcopy causes significant psychological discomfort (this is due to the fear of the possible results of the procedure, fear for the health of the child, the need to take off all your clothes below the belt, and so on), the doctor may allow the patient to listen to relaxing music during the procedure. If the music soothes you well, ask your doctor in advance whether you can come to the colposcopy with the player. In addition, deep and slow breathing helps excellently to relax. Just don't breathe deeply and often - this can cause hyperventilation, and it has the opposite effect.

Peculiarities of the Procedure at Different Stages of Pregnancy

In the early stages

The procedure is done very neatly and sparingly and differs little from the usual examination by a gynecologist. In the absence of external abnormalities simple colposcopy without processing solutions is conducted. If a pre-cancer conditions is suspected a biopsy is conducted.

In general, the colposcopy in the first trimester takes place in a normal mode.

In 2nd and 3rd trimesters

During pregnancy vaginal discharges become more viscous and impede the checkup. To eliminate them, the gynecologist treats the surface of the cervix with 3% solution of acetic acid and removes accumulated incrustation using special sponges. The patient must take horizontal position and lie on the right thigh. Regular examination in a gynecological chair can cause low blood pressure.

During pregnancy the cervix increases, blood vessels become larger. Colposcopy at later stages demands accuracy. In case of bleeding the gynecologist will use a special Monsel paste.

Contraindications for Colposcopy During Pregnancy

It is very important to be examined by a gynecologist before the conception, since pregnancy can affect the accelerated development of many diseases of a woman. Do not worry if you did not manage in time to do all the examinations. Colposcopy is a safe and painless procedure. It is performed at all stages of pregnancy.